Don't Stand So Close to Me 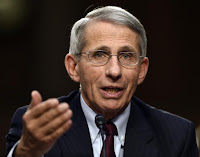 I’m no Anthony Fauci.  This isn’t that kind of post.  The statistics are changing too fast.  Further, I’m not a medical professional, nor do I play one on TV. For that matter, I didn’t even stay in a Holiday Inn last night.

My husband and I are currently in Day 60 of quarantine.

And yes, we’re still speaking to one another.  Even if to say, “Hey – do you want another beer?” 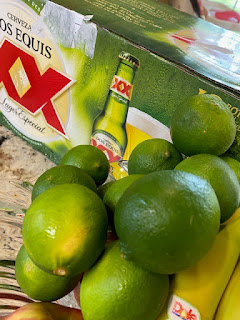 I mean … seriously … has this driven anyone else to drink more than what they normally do?  I heard that alcohol sales have increased 26% since everyone started quarantining.  I think Keith and I may have been responsible for at least 20% of that number, alone.  (Kidding!)  But I will say we’re buying limes like they’re going out of style, so …


I’ve just got to get back to some semblance of normalcy – in order to save my waistline! 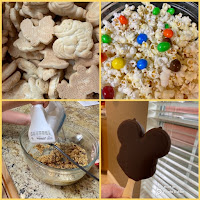 Since this has started, we’ve brought food into our home that we wouldn’t normally eat.  There are animal crackers.  And m&ms (to dutifully be placed on popcorn).  And cookies to be baked.  And ice cream (Mickey Bars, to be exact – and They. Are. DELISH!)

But we also bought a Paleo Pancake and Waffle mix that isn’t half-bad (if you cover it with a full serving of Mrs. Butterworth’s syrup!)

And let’s talk about our shopping experience at HEB (our local grocery store), shall we?

I can say that grocery shopping ranks right up there with dusting on my list of things I’d rather not do.  I mean … before all of this mess began, I could come up with a dozen reasons why I needed to use their curbside service.  And for the first several weeks of the shut-down, it was impossible to get a time slot for curbside pickup without some serious planning; I mean ... who knows what they're going to want to eat two weeks from now?  Seriously.

So into the store, we must go (one at a time, of course).

Keith and I have taken turns.  He makes one trip, I make the next.  I gotta say, and I don’t think I’m alone in this, I went through a period (before we were required to wear masks), where I actually suffered a bit of anxiety while in the store.  Is it because people weren’t staying two arm lengths’ away from me?  Yes, to some extent.

But it was also because of the empty toilet paper and Kleenex shelves.
And the people who, prior to the requirement, weren’t wearing masks, and spent five minutes touching every package of hamburger meat before they decided on one, put it in their cart, and then apparently, after more conversation, decide they didn’t want hamburger meat after all.

I like grocery shopping even less right now.  As if that were possible.

And anxiety isn’t the only emotion I’ve been feeling.

I read something, at the beginning of quarantine, that said “It’s okay to grieve.  To grieve the missed birthday parties.  And happy hours.  The date nights.  And weddings.  And cancelled vacations.”

If I’m being honest, I’ve done my fair share of grieving.

As Keith heads into retirement, this was supposed to be another banner year for us in terms of travel.  (We’re trying to check off our bucket list destinations while we’re still young enough to enjoy it!)

We were due to leave for Thailand at the end of March.  Our connections through Shanghai and Inchon became questionable when the travel bans began.  We kept waiting for word from our airline about re-routing us or cancelling our flight all together; we couldn’t bear to make the decision to cancel on our own.

Finally, two weeks prior to departure, I checked our flight status.  I found it odd that the itinerary still shown on the airlines’ website.

Until I read the fine print.

We’ve also had to cancel trips to Costa Rica, a cruise I had planned with my girlfriends, a romantic rendezvous to Paris, and most disappointingly, a half-marathon I had planned to ruck in Colorado (Where the Air is Thin). 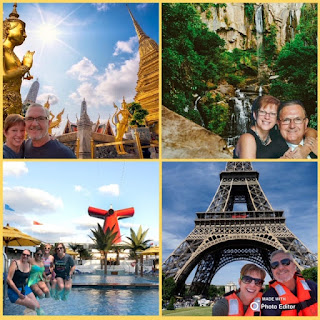 While traveling provides us a way to connect to the world, I have a group of friends that, before the pandemic, I spent a little time with every day.  My CrossFit family. 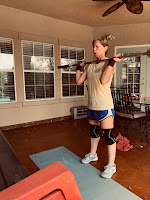 With our box closed, the owners ever-so-generously loaned out their equipment.  And my garage, back patio, or my living room became my new "box".

They worked hard to keep us connected.  Through social media, they provided body-weight workouts (for those who didn't have equipment at home) and daily, weekly, and monthly challenges.  There were twice-daily check-ins – just to see how we’re all doing; a buddy-check, if you will.  We’ve shared completed workouts.  The “like” emoji sometimes our only source of encouragement, without the coaches yelling “keep going!”, “get to the next set!”, “pick up the bar!”, and “good job!”

I went through a period where I lost my motivation to work out at all.  Depression setting in when the clock showed 11:40, the time I would’ve normally departed for my 12:00 class.  Friends saved the day, by reaching out and saying, “Hey!  Let’s do this workout together today!”

Our box is re-opening on Monday.  With all kinds of precautions in place.

And my flabby tummy, arms, thighs and buttcheeks couldn’t be happier!  (you’ll understand there will be no pictures depicting said body parts.)

There will also be no pictures of the ever-so-prevalent grey hairs which now show atop my mis-shapen head!

Keith has long threatened to grow a ponytail upon retirement (heaven knows I’ve always hoped he was kidding!)  If you know my husband, I gotta ask … can you really see him growing a ponytail?

Turns out, I needn’t worry. 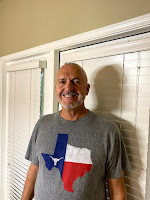 He got so tired of his hair curling and generally becoming unruly, that he pretty much shaved his head!  He didn’t mean to give himself the Corona buzz, but since he couldn’t possibly wait 10 minutes for me to get out of the shower to help, that’s what he got!


And the dogs.   Our precious Topo and Bentley.  We typically have them groomed every other month.  They were actually past due to see our beloved groomer, Yoko, when the shutdowns began.

I dare say they were doing a fine job of mopping the floor.

Keith has long told tales of how he groomed one of his previous pets, Pepe, a Spitz – leaving him looking like a hairless rat.  You can imagine my hesitancy in letting him groom our dogs.

Alas, I gave in, begging him to order the clippers.  Knowing that whatever damage he did to their hairstyles, Yoko, could fix by the time we’re allowed to go outside again.  All in all, I’m happy to report he did a pretty good job. 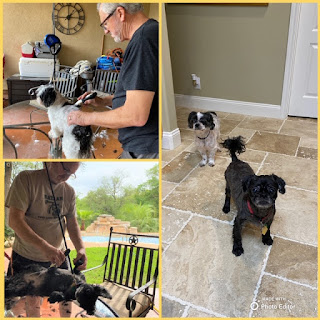 But I’m still not letting him near my head with his clippers!

I miss my weekly movie dates with my friend Ana.  I even miss seeing the $18 charge on my credit card for my Unlimited Movie Pass.  Because it means I don't get to see my friend.

And I felt so dejected because we won't get to see the Broadway version of "Aladdin" or take our pumpkin-girl to see Disney on Ice for the first time (my first time too!)

For all the emotions I’ve experienced in these last eight weeks, it’s the good stuff I’m trying to hang onto.

When our grandchildren’s daycare closed, we provided childcare for our pumpkin-girl, man-cub, and bean.  It’s been exhausting, it’s true (Hey!  I qualified to eat off of the 55+ menu at ihop during this pandemic!  I exhaust easily!)

But it also allowed us to see our little bean grow right before our very eyes as she began to crawl, pull up and stand up on her own, how our rough-and-tumble man-cub can also be the most lovable little boy ever, and how incredibly curious our pumpkin-girl is (not to mention being an awesome big sister).

I’ve never been one to wear a lot of makeup.  Though I do prefer to have some on to try and hide my wrinkles.  Like a lot of people, I’ve become accustomed to not wearing any makeup at all.  Moisturizer, yes.  Sunscreen, yes.  But no makeup.  It’s kind of refreshing.

I have, however, put makeup on to go to the grocery store.  But only the top half of my face.  Because face masks.

A couple of my friends have taken up hand-writing letters.  Including my best friend from grade school, who encouraged me to follow my passion and Just Write!  It was such a joy to open my mailbox and find their letters waiting for me.  And even though my hands are a little more arthritic these days (I mentioned the 55+ menu at ihop, right?), I have enjoyed writing them back.  (And yes, Amy, I know it’s my turn to write!)

While we’ve been shut in, with nowhere to go, we’ve taken to the TV for entertainment.  We’ve escaped our reality by binge-watching mindless, guilty-pleasure type shows like The Tiger King and Love is Blind.  Oh yes, we did!  We’ve also delved into deeper dramas such as The Plot Against America, Band of Brothers, and all eight seasons of Homeland.  That’s a lot of TV!

Keith and I have sat at a table, beers in hand, determined to finish a Frozen II puzzle.  Don’t judge.  It was literally the last puzzle on the shelf! 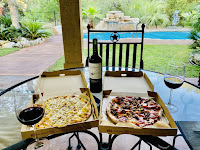 Our date nights have changed, but have become more enjoyable.  Pizza and wine on our patio.  Enjoying the evening together, talking and enjoying each other’s company long past sundown. Waging a joint battle against the mosquitoes.

Equally, we've enjoyed starting our day, watching the sunrise over our back yard while we drink our coffee.

It's moments like these, I believe, that have convinced my husband to retire sooner, rather than later.  He's decided he's not returning to the office and only acting in an advisory capacity until the sale of his business is finalized.  I couldn't be happier!

There have been Zoom calls with my Emmaus reunion group (Leaps & Bounds).  And Happy Hours with girlfriends.  It brightened my day to see their smiling faces. 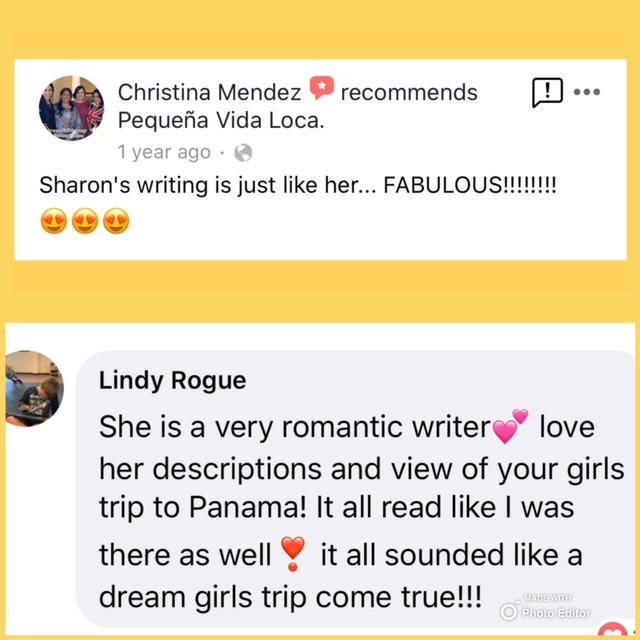